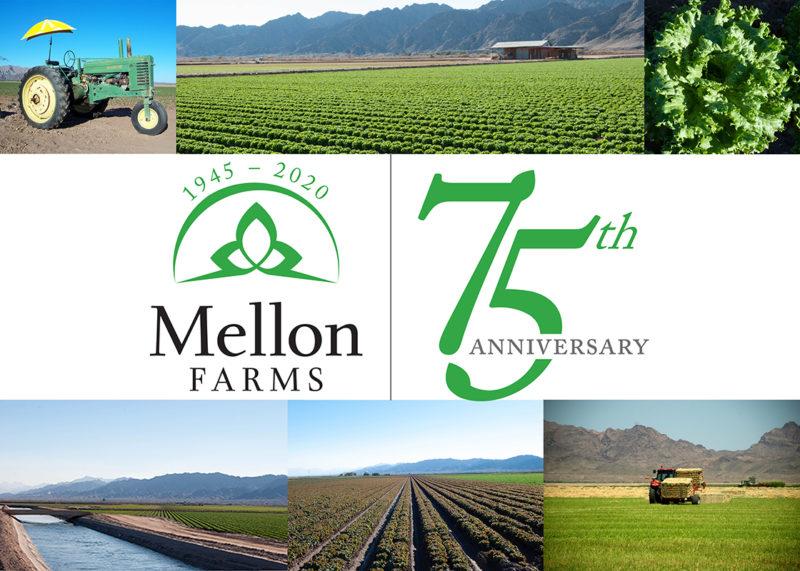 Yuma, Arizona – February 2020 – Mellon Farms founded in 1945 is celebrating a milestone anniversary of 75 years of being stewards of the land they farm as well as having provided families across this great country the highest quality fresh winter vegetables from the renowned growing regions of the Yuma, Gila and the Wellton-Mohawk Valley along the Colorado River basin.

When Archie Mellon founded Mellon farms it was his goal to create not only an environment for excellence in family farming but to ensure the Mellon family would meet the growing demand for fresh fruits and vegetables for generations to come. Three generations later the family farming operation is doing just that.

Yuma County is referred to as the “winter vegetable capital of the world,” says Doug Mellon. With 350 days of sunshine and high-quality water from the Colorado River, the winter produce season begins with plantings in August and harvests through May. The family operation grows leafy greens and other vegetables for some of the largest marketers and processors in the United States. In addition to the finest fresh produce, the company grows fruits, seed crops forage crops and grains, thus making Mellon Farms a year-around farming operation employing hundreds of people in good jobs 365 days a year. With their county-wide land coverage they have the ability to meet their customers produce needs in Yuma County by placing each of their crops at a location with the proper microclimate to ensure high quality, high yields and a successful harvest.

How the family got into farming is a story within itself. Archie Mellon was an Army Air Corps Flight Instructor stationed in Yuma during WWII. Upon release from the Air Corp in 1945 he began farming in the Gila Valley and over the years expanded the operations to include the Yuma Valley. Archie had three sons; his middle son Doug began farming with his father as a young boy. Doug acquired his first farm in 1961 and married Pamela Simons from Yuma in 1965. They incorporated Doug Mellon Farms, Inc. in Arizona in 1976 for the purpose of farming. Doug went on to expand the operations to include land in the Wellton-Mohawk Valley as well as the Yuma and Gila Valleys.

Doug and Pam have three children, Colin, Todd, and Cory, who have all chosen to continue in the family business. Colin and Todd received their degrees in Agriculture from the University of Arizona, Cory received his degree from California Polytechnic State University in San Luis Obispo, California. The three sons incorporated Doug Mellon Farms II, Inc. in 2008 and have assumed the management of the operation. Each member of the family as well as their dedicated team never take their commitment for granted in providing the best agricultural products in the region. This is evident by their strong commitment to stewardship, sustainability, worker safety and of course food safety.

Where it concerns sustainability Colin Mellon says, “Being good stewards of the land is an obligation, and ultimately makes the best business sense.” Mellon Farms good sustainable practices include composting in a manner compliant with Food Safety regulations, tilling under crop residue to incorporate the organic matter back into the field, and nutrient testing to prevent over fertilization. Crop rotation is important to land health, and the fields are leveled and prepared using the latest in laser and GPS technology to optimize the growing area and water delivery. “We are ever mindful that those that work with us now, and will in the future, depend on our continuing business health to provide their livelihood,” said Cory Mellon.  Todd Mellon continued, “We also believe that trading within the local community promotes our local economy and in turn helps make Yuma a better place for ourselves and generations to come.” To this farming family sustainability has deep and broad meaning the company puts into practice every day.

The Mellon family continues to pass down a strong commitment to the land, the community, and their people. While the third generation assumes management, the fourth generation is active in FFA and/or 4-H, as well as continuing their education. This family tradition carries over into the fields as well. Many of Mellon Farms’ employees are also second and third generation; the family names Urias and Banuelos are just two that have figured prominently over the years. As Doug Mellon says, “We don’t tell them how to do their job; we ask them how we can help them do it.” Doug continues, “It is now up to my boys and their children to continue our family faming legacy with passion and an eye towards the future as the industry evolves and as demand for our products continue to grow. It is up to us and other family farms to feed the world, a responsibility we take very seriously.”